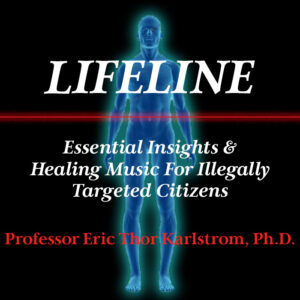 Millions of people throughout the world are now being secretly targeted, tracked, terrorized, and tortured in a massive, illegal government-military-intelligence-corporate black operation that has been ongoing since World War II. The “program,” often referred to as “organized stalking-electronic torture,” “counter-intelligence stalking” and “contract stalking,” has many facets. Its victims are mostly innocent civilians who have been secretly and wrongly watchlisted as “terrorist threats.” The lives of these “illegally targeted persons” (ITPs) or “targeted individuals” (TIs) are systematically destroyed via psychological warfare and remote no-touch torture technologies, including “soft-kill, slow-kill, and silent-kill” directed energy and neuro-weapons. Their remotely, electronically-captured biometric data is trafficked and traded through an extensive network of military, corporate, university, medical, banking and insurance institutions that function collectively as a criminal syndicate.

The primary goal of the “program” is apparently to convert natural human beings into cybernetic (man-machine) or “cyborg” (cybernetic organisms) slaves. Thus, TIs are non-consensual human experimentees, lab rats, in the testing and deployment of a host of technologies designed to permanently alter, control, and enslave human beings. As of this date, it appears that these technologies are soon to be deployed against the entire human population.

In 2013, two years after retiring from a 30-year career as a university geography professor , I became aware that I was being targeted in this program. In response, I began an educational website, gangstalkingmindcontrolcults.com, in order to educate myself and others about the nature and purposes of these horrendous and nefarious activities. Gangstalkingmindcontrolcults.com (also globalgestapo.com) now has over 1400 posts. Furthermore, the information and insights provided in this website build upon the extensive information base I had already established in my other educational websites: 911nwo.com, naturalclimatechange.org, and sanluisvalleywaterwatch.com.

This “Lifeline” musical-narration project combines some of the most essential insights from my gangstalkingmindcontrolcults.com website with instrumental music I have composed on piano, guitar, and banjo and recorded in various CDs on this website: erickarlstrom.com. It includes some 73 tracks which can be purchased together or individually.

It is my hope that the essential information and insights presented in these “musical narrations” and songs will help:

Inform and strengthen other Illegally Targeted Persons so they can better survive their hellish ordeal.

Expose and defeat this diabolical program and the human devils that are now profiting from the destruction of so many innocent lives.

Prevent this heinous program from “going global” as an essential component of the Mark of the Beast slave system.
“You are of God, little children, and have overcome them, because He who is in you is greater than he who is in the world.” 1 John 4:4